We grow older by the second. All of us. It’s a fact. On Saturday 4 December I turned 54. I generally don’t do birthday bashes but I really wanted to share this one with friends because it’s been a kak time on the planet and in spite of the chaos I had a lot to be grateful for. The idea of drinks with friends was quickly shelved because of Aunty Omicron. So Anwar and I went out on our own.

Growing up, my parents never made a major fuss out of our birthdays. I think they were just too busy with the things of the Lord. So we would do amazing things like go to the Spur whenever we all had the time to. This was a good thing as I then never really had the urge to go all out with birthdays. To such an extent that it was not peculiar at all when I made it clear that I didn’t want a 21st birthday party. You know, that traditional one where a hall would be hired along with ten girls and ten boys, all in matching outfits, and a whole 21st march thingie with a 21st key, signaling the beginning of that new chapter in your life where you could do things that big people do. Ja. You had to be 21 back then. What a throwback. The digits are almost swopped around now.

Birthdays on social media can actually cause a great deal of anxiety. There’s a social media way in which birthdays are done. And I’ve noticed that different people play the game differently. Some give us a countdown. We all know one person like this. She usually posts IT’S MY BIRTHDAY MONTH! SIXTEEN DAYS TO GO! Why are you doing this! There’s a lot going on in the world right now. We will wish you on your birthday but seriously, the countdown is bit much if you are not Desmond Tutu. Facebook will mos remind us on the morning that it’s your birthday.

And then the day after your birthday, you are required to post a THANK YOU FOR ALL THE MESSAGES thingie. I did that. I had to. Because I received the most beautiful wishes from so many people. But the THANK YOU post is also a decent way in which to get the slack people who forgot to wish you to wake the fudge up!🙂

But it doesn’t stop there for some. The IT’S MY BIRTHDAY MONTH girl continues after her birthday with IT’S STILL MY BIRTHDAY MONTH! I dunno hey. There’s a reason we call it a birthday. It happened on one day. Your brave mommy did not scream for 31 days.

Back to my birthday lunch on Saturday. So like the good responsible citizens that we are, Anwar and I decided to go it on our own, lunch for 2, at La Perla in Sea Point. La Perla is one of those strange Cape Town restaurants that’s been around forever. It’s not cheap which is why it’s important to be seen there at least once every two years. We had the best time. I particularly enjoyed the random chat with 2 very entertaining chaps who were out celebrating because they had both finally decided to divorce their wives who happen to be sisters. Both gals are helluva annoying, we were told. The guys just could not decide who was actually married to the more annoying sister. (I quietly wondered if the sisters were out somewhere having celebratory tequila shots too!).

And so I wake up today, a remarkably sexy 54-year-old man, on a Monday morning after the weekend that was. And as usual I am flippin relieved that the actual birthday is over because now I can get on with life until 4 December next year when everyone will again remind me that I am a year older. I wear my age with pride because I know that I’ve done a shit load of amazing things with my life up until now. The irritating thing is that when I announce my age for whatever reason (usually not prompted by me), there’s a pause from my younger friends. Quickly followed by YOH! It is that YOH that is loaded. It means one of two things – you’re old! – or my personal favourite: you look fukkin amazing! I prefer to go with the latter. 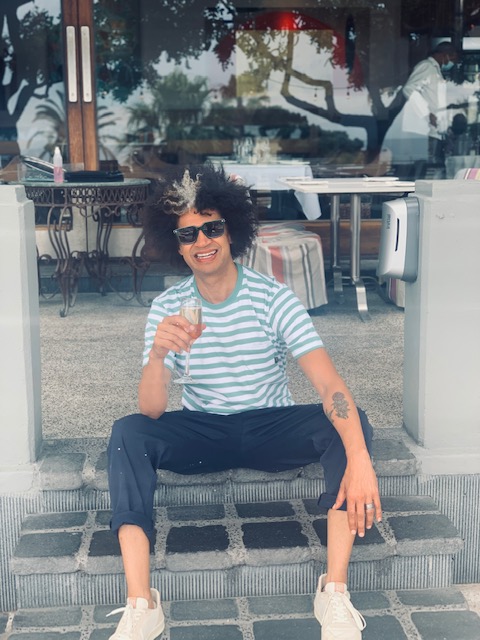