Yoh, over the past few days, South Africans were upset hey!  Essentially for two reasons.  That bladdy new Variant.   And then the quick Travel Ban that followed.  Yirre the memes made ma laugh.  Many locals were not impressed with our doctors for immediately telling the world that a new variant was discovered.  One person on twitter: COULDN’T YOU’S JUSS HOU YOUR BEK! Lol.  Sham man.  Don’t be so hard on the doctors.  They were keen to let the world know that they have matric with exemption.

I was doing a gig two nights ago where I said that the travel ban was a blessing in disguise for some, in that you now no longer need to see your family from the UK over the festive season – God works in mysterious ways!  There was raucous laughter from the audience!  Obviously then, I was not completely wrong!  J

The kakkest thing about the Travel Ban is that our Tourism Industry will once again be brought to its knees.  For those of us who are able to, let’s make a concerted effort to do some local touristy things over the next while.  And as you all know, it’s much better to make lurrrrrve when you’re not at home.

So when the overseas bosses barked TSAK YOU’S CAN’T COME HERE ANY MORE, I have to admit that my Cape Town kitchen floor was not drenched in tears.  I do my fair share of traveling (some for work and some to keep the marriage going) – and I have to say that traveling is not my favourite sport.  Let me soema use London as an example.

The flight over already, is as inconvenient as hell.  Yes I’m talking about Economy Class.  Because even if you start out having Business Class fantasies, by the time you’re done with the maths, the conversation at home usually ends with “it’s fine man lets go economy – there’s a lot we can do with that extra 50 thousand”.  And so you arrive at Departures, freshly showered and in a good economy mood.  Three hours into the ten hour flight, reality kicks in.  Who knew your legs were that long?!  Six hours into the flight and everyone else’s movie seems a lot more interesting that yours.  Dammit.  You’re making terrible choices in the sky.  But you keep watching because, if you stop watching your shit movie, you would have to realize that you need to use the toilet.  The small one with the wet floor that everyone’s been using.

The hotel room is small.  And it’s a not a cheap hotel.  That’s just the way things are in that land.   I do love roaming the streets of London though.  It has a sexiness about it.  As long as you don’t run out of money.  Which can happen in about 45 minutes if you don’t remember that you need to multiply everything by a million  – in case you want to know what that one glass of wine is really costing you.

Anwar is an efficient traveler and drags me kicking and screaming from one touristy spot to the other.  The whole day.  It’s flippin exhausting.  Don’t let me get to the business of having to speak slower to the locals because apparently not everybody understands YOU HAVEN’T MAYBE GOT A SPARE ENTJIE THERE.  Ai jai jai.  My preference then, if I had my way, is to find one very fabulous pavement café, where you can watch the world walk by, while nursing a bottle of Sauvignon Blanc.  That sounds like a holiday to me.  Holidays are not meant to be exhausting.

And as the days zoom by, you realize that you are wearing the same clothing on several days because you mos packed lightly.  This pisses me off.  Particularly when you see other people all around you looking lekke.  I can also look lekke!  But my stuff is all at home!  I want to go home dammit!

And so the day arrives when you go back to the Mother City.  Not a day too soon.  You land around midday.  Which is just perfect.  Because it’s daylight.  I mean, nobody wants to land at night.  In case there’s loadshedding.  O South Africa, how I’ve missed  you. 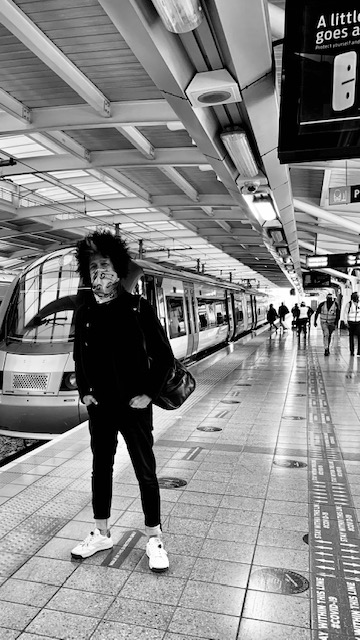